You're only as blonde as you feel... 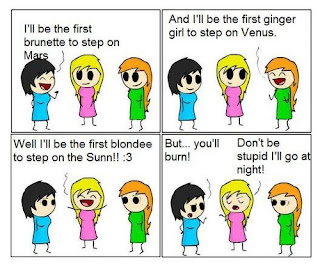 Today I had an experience, one where I would be called “a dumb blond.”  Now that we have that said and established, I will tell you my adventure.

I had an invite to go and be a part of Murray’s production of Hello Dolly. I was completely stoked about the whole situation since I have had the STRONGEST desire to do a show this summer.  I got a hold of the director and he told me that practice was supposed to be at Longview Elementary tonight.  He didn’t give me an address so I looked it up online, and got directions from Google Maps.  When I got off of work I had the feeling to go straight there with my directions and try to at least find the place.

I drove around, tried to follow the directions, and well, long story short, my directions led me astray.  Apparently I found the wrong address online.  Feeling defeated I called up someone in that cast and asked her for an address to the school.  I wasn’t too off.  My car then started chugging.  Less than a mile later my gas light came on.  My thought was, “In my old car I could go awhile without getting gas so I should be fine.” I decided to keep driving.  My car then started to lose momentum and that’s when I started to panic.  I said a quick prayer asking to find a gas station.  I was then on State Street driving and my car started to slow even more.  I then spotted a Seven-11 about a mile in front of me and that was when my car almost came to a stop.  I pulled into the nearest parking lot and my car died right in the middle, almost at a stall.

My thought was that I could go walk to the gas station, figure something out, but at first I had to get my car out of the middle of the parking lot, so I put it into neutral, went to the back and pushed.  In my mind I felt that I could be able to push my little car by myself into the stall that wasn’t very far in front of me.  My ego was smashed quickly as I realized I couldn’t push it very far as hard as I tried.

A guy that was pulling out of the parking lot put his car into reverse and asked me if I needed help pushing my car.  Almost in tears I looked up at him and told him yes.  He got out of his car and strolled over.  He was a man about the height and body type of Braddy.  He wore gym shorts and didn’t have any shoes on.  Him and I then pushed the car into the stall and he held it while I put it back into neutral.  He then asked me if I had ran out of gas and I then explained to him about it being a newer car and how I didn’t know that it would have died on me so quickly… I know what you all may be thinking right now… I really did feel and look stupid in front of this kind Samaritan.  He then asked me if he could drive me over to the gas station so I could get gas.  I didn’t hesitate and gratefully got into his car.  When we got to the gas station he told me that I could buy a gas can from them and would be able to feel it up.  He then apologized and told me that he was sorry that he couldn’t help me more because he had to go head off to an appointment.  I humbly thanked him and walked into the gas station.

I sheepishly walked up to the guy at the counter and asked him where the gas cans were.  He pointed them out to me, and I walked over there to pick one up.  I then paid for the can and paid for a gallon of gas.  I went, filled up my gas can, and not knowing what the little spout for the can was, so I put it back in the gas can… I then took a walk of shame across State Street.  I could feel every eye on me as I walked pass the cars that were stopped at the light both directions.  I then walked the almost mile to return to my car.

When I got to my car I opened the cap on my gas tank and then opened my gas can.  That was when I realized that I needed the spout that I put into the gas can.  I went to pull it out, but in the process spilled gas on my hands and on my cell phone.  It then took me a good 20 minutes to figure out how to put the spout on the gas can, when the directions were on the front of the can the whole entire time…

After I filled up my car with the gas can I went to the gas station and filled up the rest of my car.

Being who I am, whenever I feel just horrible I look for something to give me a quick pick-me-up.  Luckily there was a Roxberry behind the gas station so I got myself a smoothie and went straight home.  By the time I had gas in my car I would have been terribly late to that practice.

I should have just turned around and went home when I couldn’t find the place the first time.  I didn’t get the clue.  Lessons learned, you may ask?

1.       When my gas light comes on in this car, go STRAIGHT to a gas station.
2.       You do NOT put the spout back into the gas can when it is full.
3.       I am NOT as strong as what I may have previously believed.
4.       Next time I get a bogus address, take that as a hint that Heavenly Father doesn’t want you to go participate in that production, for whatever reason it may be

and...  I'm not as good of a navigator as I thought I was and should stick to using my GPS.

Yes, I do have blonde hair.  Yes, I am young.  Did I learn from this experience? Oh yeah.  Will I be able to do things better and not feel/look as stupid? Hahaha, it’s me we’re talking about!  I will know what to do in that situation if it ever arises again.
Posted by Justina at 8:30 PM

Justina
Hello All! I do comedy improv on the weekends, my favorite animal is a Panda, and my new favorite Disney princess is Rapunzel from Tangled. If you want to know anything else about me, don't be afraid to ask.